Home > Guidance & Information > Should I Use Dermestid Beetles in My Dubia Roach Colony? 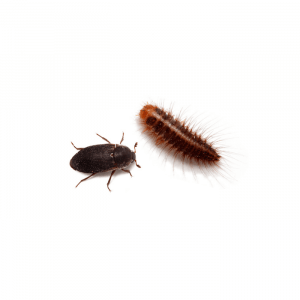 Visitors periodically ask us to weigh in on whether or not they should use Dermestid beetles and larvae as cleaner crews in their Dubia roach colonies. It is tempting to give a “yes” or “no” answer based on our experience, but that might discount the experience (or potential experience) of others. What happens in one colony may not happen in another. In the end, each case is different. The decision of whether or not to use cleaner crews is an individual one at least partly based on a unique set of circumstances and needs.

That said, there are some general concepts that may apply across the board, or nearly so. While location and environment, for example, are circumstantial, other things are more universal. The fact that we are dealing with Dubia roach colonies is one example.

Instead of a simple yes or no, we decided to provide anecdotal and other information about how Dermestidae and similar insects work and have worked as cleaner crews in our colonies. We’ll give you the good, the bad, and the ugly and allow you to decide for yourself whether or not to use them, given your unique circumstances.

Our decision to add cleaner crews

Our decision to add Dermestes to our Dubia colonies was an easy one. In short, their benefits outweigh their costs. They are highly effective, the cheapest form of insurance against mold and bacteria-related problems we know, and easy to maintain. We could almost just drop them in our colonies and forget about them. As we discuss in our post about Dubia roach die-off, bacterial overgrowth is dangerous. It is something you never want to deal with because it can cause grave harm to a colony. Cleaner crews may help avoid it.

Since writing this article, we discovered that “combination cleaner crews” consisting of both Dermestid beetles and lesser mealworms is more effective than either species alone. We like the two together and we think they are worth considering for your situation. We discuss this in more detail below.

Unwanted bacterial growth is among the biggest potential problems with the dark, warm, moist environment Dubia roaches need for growth and reproduction. When combined with poor air circulation and the foods bacteria love to eat – like food particles, roach feces, and dead roaches – conditions inside a colony can go south in a hurry.

Unfortunately, this can have grave consequences. Die-offs are not uncommon among large captive tropical roach colonies, and Dubia roaches appear more susceptible than most.

Cleanliness is a related issue. Roach bins require regular cleaning, and the more humid the environment is, the more frequent cleanings must be. Neglecting cleaning for too long can lead to an accumulation of frass and food particles. This can contribute to mold, bacterial, and/or fungal growth. This in turn can result in colony stress. Colony stress may lead to growth problems, breeding problems, and even death. More bad stuff.

In addition to being a danger to the roaches, moisture build-up and the fungi and/or bacteria that accompany it can cause foul smells. This may or not be an issue for you depending on how many colonies you have and where you keep them. Smell is probably going to be an issue for most people. Dubia roaches don’t tend to smell bad, and we consider this one of their many benefits. The benefit is lost when bacteria colonize.

Dermestid beetles and larvae, with help from another cleaner species, have reduced and prevented these problems in our colonies.

Dermestid beetles and larvae eat dead roaches. In sufficiently large numbers they can greatly reduce the amount of decaying organic matter in an enclosure. Because this is fuel bacteria need to grow, bacterial growth can be reduced along with its ability to gain foothold in a colony. In theory, a reduction in bacteria equals a reduction in the risk of harm, and this has born out in our experience.

Reducing the number of decaying roaches also cuts down on moisture build-up. Moisture can become trapped in dead roaches, especially the ones buried deep in frass. Colonies with high humidity are the most vulnerable to this danger. Once it starts, this process tends to snowball, and the bin must be cleaned to avoid further (and potentially more serious) issues.

Unfortunately, moisture build-up often occurs beneath the surface, out of sight for the most part. It is not always apparent, and you may not notice it until it is far advanced. As a general rule, reducing moisture lowers the risk a colony will be harmed by bacteria. In our experience, the best ways to reduce moisture are (a) reduce humidity, (b) clean regularly, and (c) add cleaner crews.

What does one have to do for all these benefits? Not much, actually. Dermestidae are relatively care-free insects. They don’t require much maintenance, and they are easier to keep than tropical roaches. Managing a Dubia colony requires more skill than a population of Dermestidae cleaners. And notably, managing cleaner insects is a lot less work than dealing with a roach colony that has gone bad from neglect. It can be a lot less expensive too. Again – a die-off is a worst-case scenario, but we’ve experienced them. They’re no fun and you should work hard to avoid them.

Are cleaner crews worth it?

While Dermestid cleaners are relatively easy, they are not completely hands-off. They do require at least some maintenance effort. Most people can probably get away with just adding a batch of beetles and larvae to their colony and checking in from time to time to see how they’re doing, but we recommend taking a little more care with them than that. Learning how to tend to them takes a little time up-front, but once that’s done the maintenance itself is easy. They may, for example, need supplemental food if the roach colony is too small to support them.

The upside of cleaner crews

For us, the major Dermestid benefits are less required maintenance, better colony health (less risk), and better smell. It’s easy for us to let maintenance slip with so many colonies, and the addition of cleaner crews reduced the number of health-related incidents like moisture accumulation and die-offs. Less frequent cleaning means less stress for the roaches and less disturbance. And frass serves an important biological function – especially for nymphs. We don’t want to disturb our roaches any more than we have to, and we don’t want to remove any more frass than is necessary.

Without cleaner crews, we find that we have to stay on top of enclosure maintenance to avoid health problems within the colony. With cleaner crews, we can manage more colonies with less effort. And there is more margin for error. For example, the first sign of trouble in a colony is usually the smell of ammonia. When that occurs, we usually find unprocessed dead roaches and moisture build-up in the frass. At this point the bin needs to be cleaned, which is a lot of work. As mentioned, it also disturbs the roaches and deprives them of the frass they need for good health.

But we avoided this almost entirely with the inclusion of Dermestidae cleaners. Further, we had no serious bacterial overgrowth events after adding a combination of Dermestidae and lesser mealworms. We think, as a rule, lesser mealworms compliment Dermestidae by eating plant matter and feces where Dermestid beetles and larvae eat only animal matter. Lesser mealworms will eat dead roaches too, but it seems they don’t prefer it. Outdoors, they are found in compost piles and animal feces, which seems like a natural fit for a roach bin with substrate consisting of frass. They do seem to be thriving and very happy there.

All things equal, and in our experience, the combination of the two insects is more effective than either alone. We have had good results in colonies with either species alone, but the best scavenging and cleaning seems to result from using them together.

The downside of cleaner crews

Maintaining Dermestidae in roach colonies requires periodic checks to see how they’re doing. This involves looking inside the bin to get a sense of their numbers and activity. This helps alert to any issues early, before they can develop into bigger problems. We occasionally decide to reduce their numbers in one colony or several. This is a fairly easy process.

That’s it for the downside. Not bad.

It is important to note that Dermestidae have been reported to be pests capable of eating through floors and walls (external link). We have not seen this. Perhaps we don’t have the right climate here. Whatever the case, be aware that while we have not had any issues, the potential for problems may exist. You should be sure they will not cause problems for you before you buy them. The same is true for lesser mealworms. They may be a pest in some circumstances. For example, poultry producers consider them a pest because they get into discarded chicken manure.

Dermestid beetles and lesser mealworms are both native to the United States and can be found throughout the country.

As for any negative impacts of cleaner crews on roach breeding, we have not experienced any. Cleaner crews are another thing to think about when managing a colony, as previously mentioned, but they are fairly care-free creatures. Once established, they tend to reduce the number of things we need to think about day-to-day rather than increase them.

While a possibility exists that they could grow out of control, this seems unlikely. It has never happened to us, and we have not heard of it happening to others. Dermestid growth is limited by food. Excess food will not be available unless there were a massive roach die-off. In this case, the colony has far bigger and more urgent problems than an increasing Dermestidae population.

The same is true for lesser mealworms. Their numbers are limited by food, and reducing their population when desired is easy.

This brings us full-circle back to “the upside”. We found that as a general rule, if the Dermestids and lesser mealworms are doing OK in a colony, the roaches are OK too. As such, cleaner crews may serve as a trouble notification system. A sort of “canary in a coal mine”, if you will. They can alert to potential problems with the roaches. So in addition to reducing the likelihood of trouble, they also warn of it. This gives us a certain peace of mind.

We have seen and experienced compelling reasons to use Dermestid beetles and larvae along with lesser mealworms and beetles as cleaner crews. From a purely functional roach-raising perspective, their benefits substantially outweigh their costs. In combination with lesser mealworm cleaners, they may afford a larger margin of safety for a colony than one without them. We work with roaches on a large scale, and cleaner crews have made our lives easier. They have helped us grow and maintain healthier colonies with less work, and have given us peace of mind.