Home > Guidance & Information > How Many Dubia Roaches Are Needed to Start a Colony? 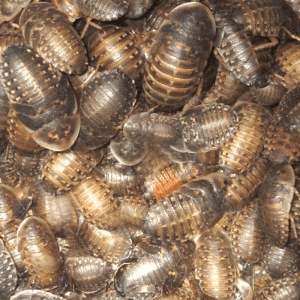 So you’re thinking about starting a Dubia roach colony and you want to know how many roaches you need. This is a common question, and there is an objective answer.

However, in addition to the natural growth rate of Dubia roaches, your answer to this question also depends on you and your situation. For your answer to be meaningful, you need to determine your goals for the colony.

The following information will help you do both.

Colony growth is a function of time

The reason the answer to the “how many roaches do I need…” question depends on you and what you want for the colony is because there is no set number of Dubia roaches required to start a colony. In theory, you only need one pregnant female. Or you can start with a single male and and a single female…or several of each…or a dozen, hundred, etc.

Obviously then, how fast this potential colony grows and how soon it reaches the size you want is the real question. If you want a colony of 10 roaches, starting with just a few is probably fine. However, you will need to start with many more if you want a colony of 10,000 in a reasonable amount of time. But how many more, and in what time? These are the questions at hand.

The first step toward finding an answer is determining your needs and expectations. From there it’s easy to figure out the number of Dubia roaches you need to start a colony that will do what you want, when you want. So decide on a goal. From there we can use Dubia roach reproductive physiology to calculate a starting point. It’s sort of a “reverse engineering” approach to building a colony, if you will. The estimate is rough, but the numbers work. The rest is in the implementation.

Let’s start with the basics:

All things equal, newborn Dubia roaches reach adulthood in about 5 months. Newly emerged males begin mating almost immediately while newly-emerged females start about a week later. Females can become pregnant as soon as they begin mating, and their gestational cycle is 65 days. This means the earliest a female can give birth to a batch of nymphs is 72 days after the day she reaches adulthood. This is roughly 220 days after she is born.

We estimate that females give birth to about 25 nymphs in the conditions common to home Dubia roach colonies. The actual number may be more or less, but 25 is a reasonable average. They repeat this every 65 days.

So let’s say, for example, that you start a new colony on day 0 with 5 newly-emerged females and one male. You can expect 125 newborn nymphs in 2.5 months, then again every 65 days after that. Assuming a 75% survival rate and a 50/50 male:female ratio, the first nymphs born will begin giving birth at about 7.5 months. At this time you will have about 50 adult females and 1,250 nymphs.

At 7.5 months, the population begins some pretty serious exponential growth as the first batches of nymphs begin having babies of their own. This is a good cut-off point. At this time you will have a colony with many thousands of roaches whether you started with 10 adult females, 50, or even 100. If you can wait a year, this discussion is largely irrelevant. At that time almost any starting number will yield many thousands of roaches of all ages.

But this takes a year. You may decide that’s too long to wait to reach your population goal for the colony. What can you do if you don’t want to wait? How many females should you start with to have 1,000 nymphs in four months? How about three months? What if you don’t want to wait a full 7.5 months for the roaches to complete one reproductive life cycle and for the colony to become self-sustaining?

You’re in luck! We put together the following graph using the formulas and averages mentioned above. The data is based on the most accurate estimations of the Dubia roach life and reproductive cycles we could find. You can use it to estimate population start and endpoints. This means you can decide what you want your Dubia roach colony to be, use the information above to determine how many roaches it takes to be it, then plot how many you need to start with to get there. 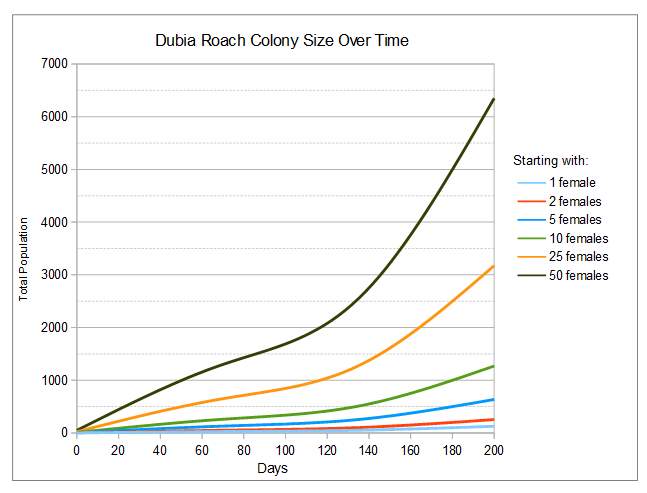 The data essentially allows you to plot nymph population as a function of starting female population and time. You can figure out roughly how many nymphs you’ll have in a new colony at any given point in time between 0 and 200 days, given an initial starting female population of between one and maybe 60 or 70. Again – rough estimates. You can extrapolate population based on higher starting numbers or more time, but as you can see, the population goes exponential. We actually removed some data (starting populations of 75 and 100) because the scale necessary to display such high numbers made the lower results impossible to read. It’s fair to extrapolate though, if that fits your situation.

NOTE: “Total population” is nymphs plus adult females, so just subtract the number of females from the total to get rough nymph numbers. If you know how many nymphs you want the colony to have at any given time, you can estimate the number of females you’ll need to start with to get there.

So that’s basically it. Colony size as a function of starting female population and time. Or, work backwards to hit a population target. Simple. This should answer the question of how many roaches you need to start a Dubia colony. Keep in mind though that while these projections are based on real averages and actual Dubia roach physiology, your mileage may vary. Factors influencing Dubia reproduction and colony population growth are many. They include temperature, food availability, crowding, stress, etc. We’ve written about these things in our Dubia Roach Breeding Guide, which we recommend reading if you’re interested. Learning about Dubia roach breeding is the logical next step in planning and implementing your new colony.

We’ve also written several other in-depth articles on related topics that you may find interesting, including one on maximizing the natural B. dubia growth rate and another on diagnosing and curing Dubia roach breeding troubles.

We hope you find this information helpful. If you have any questions, please feel free to ask below!