Home > Guidance & Information > What if My Animal Doesn’t Like Eating Dubia Roaches? 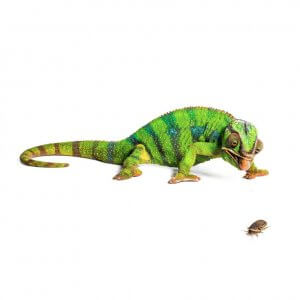 The Dubia roach is a very popular feeder for captive reptiles. This is true for several reasons. First, it’s widely considered among the most nutritious, if not the most nutritious feeder insect. Second, it’s very well-mannered. Dubia roaches don’t bite, chirp, jump, hiss, climb walls, burrow, or smell. Third, insectivores tend to love them.

But what if they don’t?

While it’s true in our experience that reptiles, amphibians, fish, and birds tend to eagerly devour Dubia roaches, this is not a universal truth. Sometimes an animal doesn’t like them. While uncommon, this does happen. And if it happens, what then? Is there anything you can do?

The answer is yes, and there may even be a fix here — at least in some cases. When a chameleon, bearded dragon, gecko, or any other animal seems to dislike Dubia roaches, the first step toward a solution is to try to figure out why.

Broadly, there are two options here:

The first option is feeding impulse. The second option is taste. We address both of these below.

Regarding the first option — feeding impulse; insects must trigger an animal’s feeding response, or they won’t eat it. If the insect species is new to an animal, the bug will have to look and act in ways that prompts the animal to eat it. This appears to be a highly visual process. Insectivores are more likely to recognize an insect as prey if it looks and moves like prey, with an emphasis on movement.

If you find that Dubia roaches aren’t triggering an animal’s feeding response, consider cooling the roaches down or warming them up, depending on the situation. A refrigerator or a lightbulb will work. If you try this, be careful. It doesn’t take much cold or warmth to have an effect. When a roach stops moving around (in the case of cooling) or starts running around energetically (in the case of warming), that’s sufficient. This often happens within 30 seconds or a minute of heat or cold exposure.

Cooling Dubia roaches slows them down significantly, while warming them has the opposite effect. If you have an older bearded dragon who isn’t as quick as it used to be, for example, and when you place roaches in its enclosure they run around like crazy and overwhelm the animal, you might start by cooling them down. On the other hand, if you live in a cold climate and the roaches don’t move around too much and your animal just kind of looks at them like he’s waiting for them to do something, the obvious place to start is by warming them up.

If this works, you may have found the solution. If not, you can move to the second option.

Regarding the second option — taste; this is where we’ve made some discoveries that may help with unusual cases where an animal just doesn’t seem to enjoy eating Dubia roaches.

As we’ve described before, the Dubia roach is a highly gut-loadable feeder insects. Its body can swell and elongate significantly to accommodate its huge appetite. When a predator eats a roach with a full belly, it may be consuming as much as two parts gut contents to one part roach.

And this is significant because we’ve found that sometimes an animal that appears to dislike Dubia roaches is actually reacting to the roach’s gut contents rather than the roach itself. This makes intuitive sense. If you bit into a jelly doughnut and discovered it was actually filled with something like a half a cup of tomato paste (just to pick something sufficiently gross to put inside a doughnut), you probably wouldn’t eat the doughnut. And if you did, you wouldn’t like it, and you wouldn’t want to do it again.

If you think this is a possibility with your animal, or you just want to give it a shot, here is what we suggest:

Put the roaches in a separate enclosure and don’t feed them for three days. Don’t worry, they’ll be fine. Dubia roaches can go a month or more without food or water.

At the end of the three days, reintroduce the roaches to your animal at feeding time and see what happens. It may take a few tries if the animal already believes s/he doesn’t like Dubia roaches. Wait until the animal eats one or two roaches and note the response. If you see some renewed interest, you may be on to something.

But if the response was the same as before and the animal still seems disinterested, remove the roaches again and repeat the six day process one more time with a different food. What’s important now is to go with something that’s the opposite of the food you chose before. If you went with apple the first time, now try a vegetable. Or maybe try something bland like oatmeal (soaked or cooked), potato (raw or cooked), or plain pasta (cooked). Just go in the opposite direction of the first food.

This has worked in about half the cases of animals not liking Dubia roaches that we’re aware of. While anecdotal, we thought it was interesting and possibly useful information to pass along for people try. In the end, some animals are just picky eaters, and you can’t please them all. But Dubia roaches are so healthy and loved by so many, and we know that at least for some, this test is going to be worth a shot.